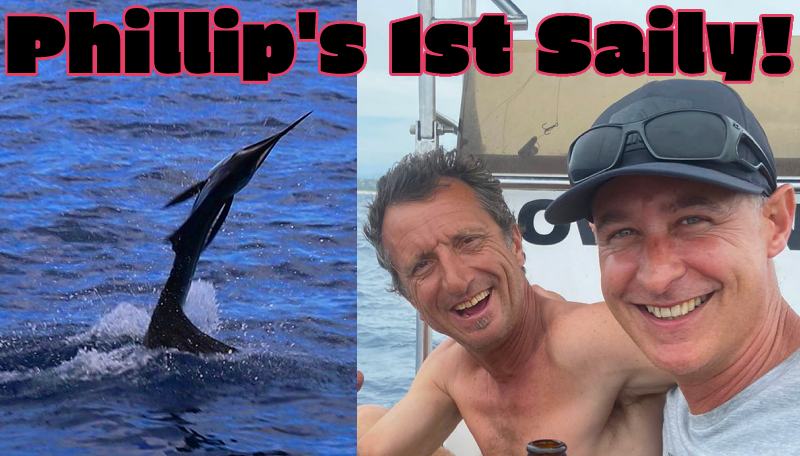 Summer Gamefishing off Port Shepstone: it’s been the most fun season for gamefishing here on the eastern seaboard of Southern Africa this 2021/22 season so far. The flood pulse out of our last functioning estuaries came blasting down as nature planned it to. The brown water plumes went right out to sea. Where the gamefish were there to meet it.

First the dorado always arrive. They come to feast on the shoals of bait that abound this time of the year. The brown water offers the bait refuge from the predators who patrol up and down the line ready to attack any foolish baitfish that swims itself out of the murky brown and into the deep blue of the Mozambique Current.

Dorado eagerly wolf down a live mackerel or shad. But red-eye sardines are their favourite by far.

Hot on the heels of the dorado, and eager to feast on them aswell as the bait, are the many species of billfish that we get here at this time of the year.

The spearos first saw a shoal of striped marlin on the Aliwal Shoal about two months back. Then the sailfish arrived. And on one of the days out there, we hooked and duffed two on light tackle (luckily it was the tiny hooks that let go and not the tackle). And saw four more. Including one beast that would have gone over 600, hooked up right next to us. Also got away obviously .

Greg Defillipi was fishing for dorado up near Umfazazana – in the Dorado Derby in the beginning of December, when he got bitten off. Quickly changing to wire, he got two nice fish out. This is very early season for couta and we are all expecting a few fish this year.

Marc Lange on the Niteshift got his one on the 2 January out of the Umzimkulu mouth area. In the most hectic buster SW.

Although, in November, the spearos got two on the shoal – very early season fish. Gavin Nell being the hitman.

The first fish of the 2021 season came out on the 27th November 2020! By Jonno Gous and Justin Campbell on their kayaks.

And here is a video from three years ago – our first couta of the season back then. Caught off Seapark, a few clicks north of the mighty Umzimkulu.

Wahoo! There have been plenty of these monsters being shot by spearos recently. You can read all about the wahoo, and the other fish that are being seen, at the Master Watermen website.

Richards Bay got these two monsters. And here off Shelley Beach, a few clicks south- this 34.8 and a 38.5 were weighed.

Right so whenever the weather gives us a gap, and the north-south current comes flying in close, we are out there everytime. Our rates are in the activities menu of this app.

Our deep-sea rates are in the activity menu.

If you would like to join as a semi-permanent charter, we have some cool deals available for you to get out there more often.

https://thesardine.co.za – all the sardine news you need