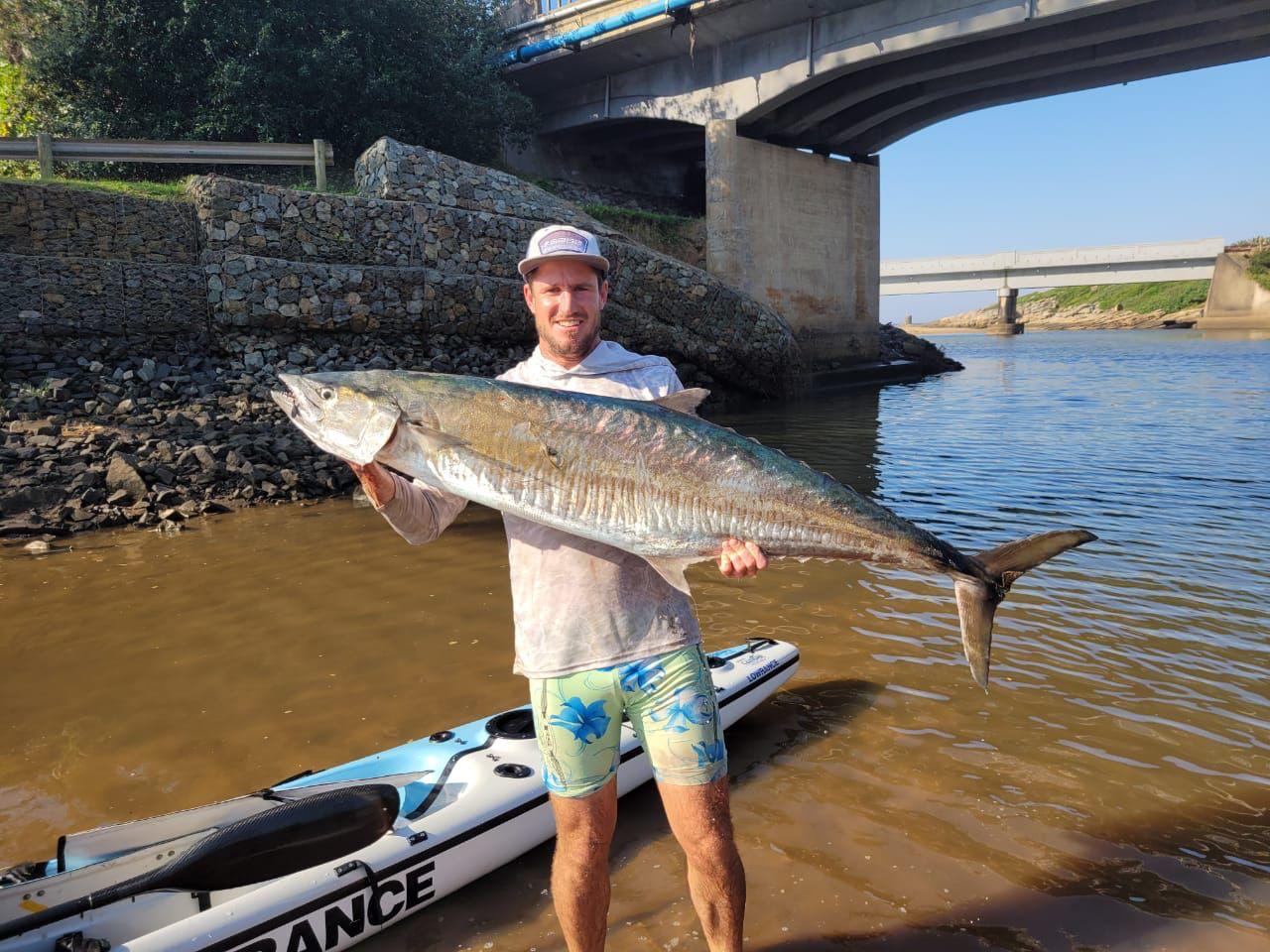 Hibberdene couta by kayak angler 19 May 2022

Fishing Report 20 May 2022: the sea has finally returned back to a normal state down here in Southern KwaZulu Natal. Only after weeks and weeks of that ugly poison soup brown water being hemmed in close to the shore – did the current return yesterday.

The water shot back up to 23.8 Celsius (from 19) and was full-up with ‘couta lights (bio-luminescent plankton that signifies the presence of hunting couta). When this current kicks, it really kicks. At about 4 knots offshore, makes things tricky for navigation and fuel consumption. But this is the gamefish water. Purple ink.

And a croc’ ‘couta came out this week! Featured image. By local kayak angler. Off Hibberdene. Really nice fish looks like 25kgs or so, maybe more?

Hibberdene does clean up faster than most places down here since there are not any major river mouths north of the place. And those pinnacles and backline rock formations are exactly the turf that the couta like to hunt in. Many, many outsized couta have come from these reefs.

Including these two monsters, taken along while back, in June, 2007. When the sardines had just arrived that season. From the rocks!!!

You can read all about that incredible day right here…

Back to the present…

There are NO sardines yet. Don’t believe anything you read in the mainstream media. And watch out for false sardine news on the social shark nets too. It’s unbelievable how stories grow and get completely out of control as the Dunning -Krueger effect kicks in.

As The Sardine News (marketing for Umzimkulu Adrenalin), we have sardine spies stationed up and down the entire coastline. Make sure to be a part of this community to never miss a single sardine this year and every year to come. Since 1987, we have been doing this. Back then we were a printed tabloid!

The shad have most definitely arrived. But we have only been catching them out deep. Away from the poison soup. Some magnificent chases too. Things are getting back to normal. And the shad will come in close with the effect of the current’s long overdue return.

Ian Logie cracked the first decent fish of the Umzimkulu Estuary winter season. The water clears up and these fish are available on artificial. Or live bait. As what felled this guy, down in the mouth area.

There has been a big Zambezi Shark terrorising everybody at night time here. ALso spotted during daylight hours, this aggressive fish has been making huge splashing noises as he chases the plentiful perch, mullet and whatever other fish, that have come back him into the estuary recently.

The other estuaries that still function, like Mpenjati and Mtamvuna, are also going to be hot as the dry season sets in.

Get in touch if you would like some of this action!

Spillers House – BnB and Backpackers right on the Umzimkulu River

LIVE Music is on right now…