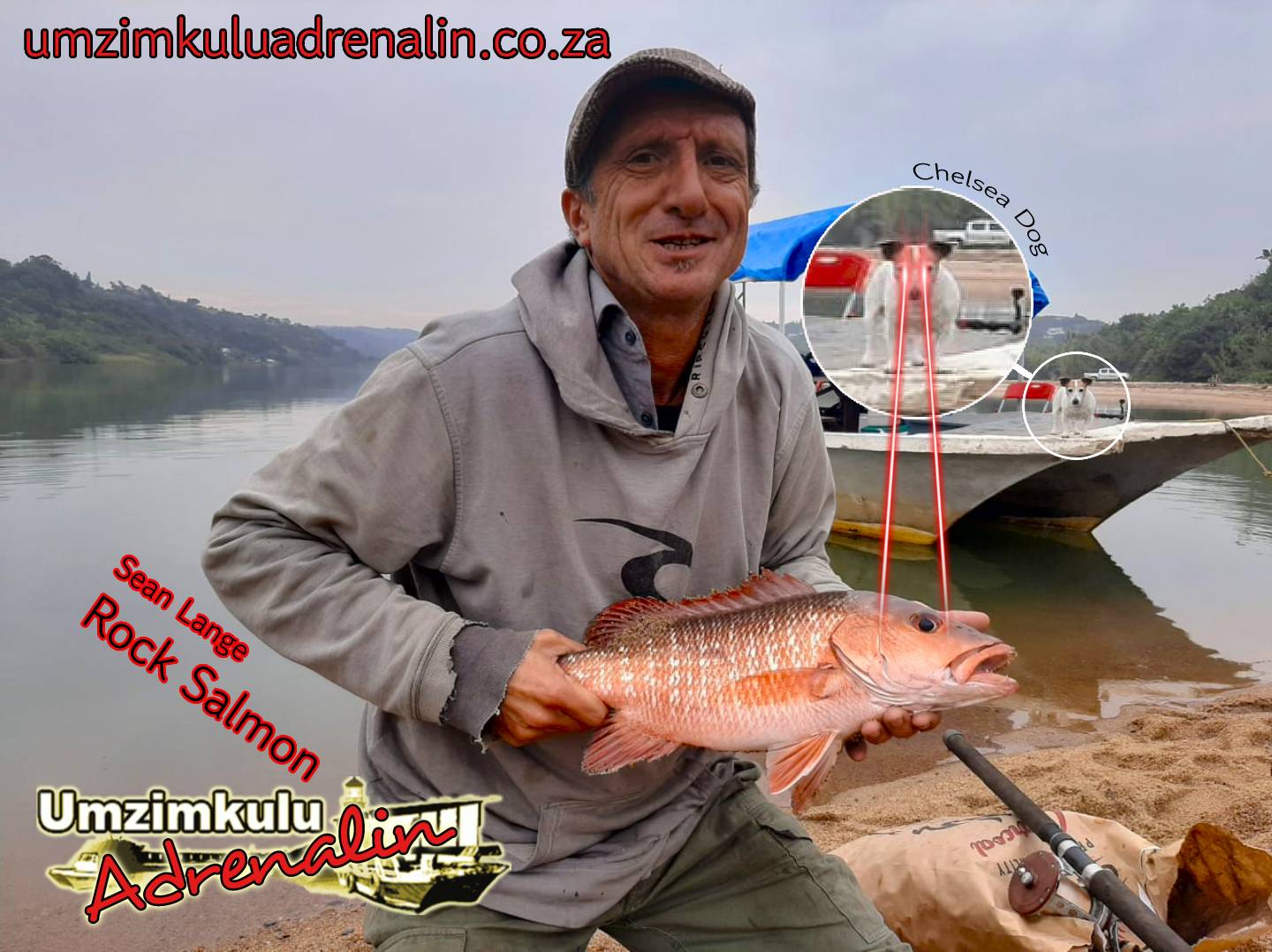 It’s time to catch your Rock Salmon: after a serious flood or two, the rock salmon come back with vengeance.

The Umzimkulu River mouth in Port Shepstone has a mind of its own and can easily be likened to a creature in the way it moves around so much. This time we have a real cool little sandspit mirroring its famous big brother, on the inside of the bridge! Reaching almost to the wall, and creating a very long narrow deep channel to the ocean. As the channel spills out into the estuary, we have a huge deep area peppered with sunken trees and all sorts of obstacles. Which the rock salmon are using to their full advantage at the moment .Both in hunting, and, in getting away!.

In fact, Liam van der Merwe and crew caught 5 in total (all released before anyone even asks), and each one tangled up in the trees. Some fish took half an hour to coax back out of their defences.

We got the first one, but after that, we just got smoked fish after fish. The other two guys in the movie…got their fair share too. I think my maths was wrong again for the totals! It was way more than what I said on The Sardine News. It was more like 20 for 12 for 8 or something. A crazy afternoon.

You can watch this entire session on video on Youtube and see the action from our underwater cameras. A bit later though! It is still in the studio…coming soon!

The small guys come in hard, straight away. Silver bream. They climb in creating a dust cloud of sardine oil and pieces right through the water column. The mullet arrive. Some big guys too. And then you see a grunter or a blacktail move in. Not nearly as aggressive as the baby stumpies, strepies and pinkies though. Who just annihilate the innards of the sardine head.

And that’s when it happens. The ultimate ambush predator moves in closer to take a look. Closer. Still closer. Until.

There is NO bite when a rock salmon takes a bait. It just goes straight down his gullet in a nanosecond – and then he tears off away. At high speed and pulling full amps. The other rock salmon come quickly to inspect all the noisy vibrations going on. Often we get double or triple strikes on days like this.

And herein lies the secret with these rock salmon. You need to find them first. When they have prey. And are in a feeding mood. These fish like this, will take a lure readily. Or a live bait. Or a plain old sardine head, evidently.

Use a circle hook because the hookup rate is the same with either a J or a circle. But the circle adds a certain level of finesse to your fishing repertoire as you are able to quickly release without the added trauma of a pair of pliers or fingers in the gills trying to remove a J hook.

With either hook, fish with full drag on. No matter what. If you let this fish go back into cover or other obstacles, you will either lose him or take an hour to pry him out of there. In the old days, surfboards were standard rock salmon fishing equipment in the estuaries. To go get the fish out of the mangroves!

We tag and release any and every good tagging candidate. And we release the others unharmed. This is because the estuary is a breeding ground for some fish. And a nursery for others. So, we don’t take fish out.

The fish is somehow damaged beyond repair. Or I decide whether the fish in question is harvestable in its overall life cycle, or not.

Ok so take this opportunity and get in touch, to get out there and hunt your first rock salmon. I rate these fish in the same realm as some billfish in difficulty to catch. These are absolute trophy fish. You best get one!

So, you can stay with us here at Spillers House, or with my folks’ place next door at the peaceful Umzimkulu Marina. We have Halaal Egyptian food here too, at the Port Captain restaurant.

You might even catch some sardines at the same time!

Big Day out with The Bear – spearfishing off Port Shepstone, KZN

Welcome and thank you for stopping by!